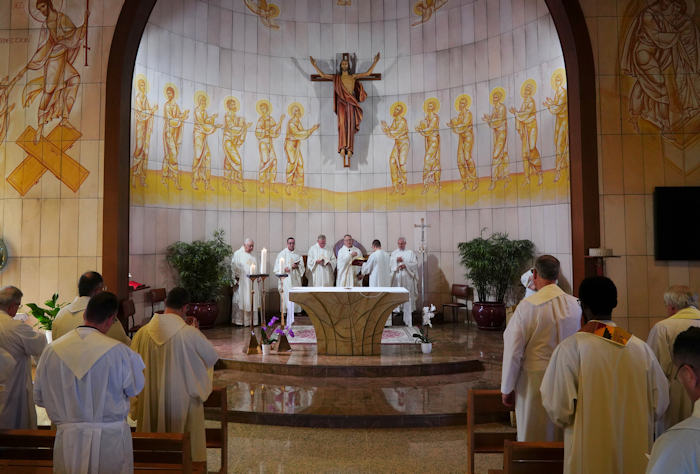 For two weeks in July, Oblates of the Virgin Mary from around the world are gathering in Fontenay-aux-Roses, France (near Paris) for the OMV General Chapter.

Held once every six years, the General Chapter is considered to be the supreme authority of the Congregation.  It evaluates the work of the current government, discusses important issues, elects the Rector Major, and sets a path for the Congregation for the next six years.

The General Chapter is made up by those Oblates who are there by right (the Rector Major, his Council, and all Provincials) as well as those Oblates elected to represent the various provinces and delegations.  These men are called the Chapter Fathers.  There are also auxiliary members of  the Chapter who are not considered to be “Chapter Fathers” but are Oblates of the Virgin Mary who help out in other capacities, such as communication, administration, and housekeeping.

The last General Chapter took place in 2015 – seven years ago.  So this General Chapter should have taken place last year.  However, CoVid delayed this event.  Pope Francis said that Chapters of religious congregations must meet in person – not on-line and not even partially on-line.  If a Chapter cannot meet totally in person due to CoVid, then the Chapter is delayed until such a time when it can meet in person.  And so the OMVs are meeting this year – 2022 – seven years after our last Chapter.

Please pray for the Chapter Fathers as they study and discuss important issues affecting the Congregation.  And please pray for the inspiration and guidance of the Holy Spirit during these deliberations – including the election of the Rector Major and his Council.